To become a champion, you need to show a lot of different qualities, including skill, determination, vision, understanding of your sport and your own limits, an ability to push those limits a little bit further, and above all, good sportsmanship and the sense of "fair play".

The O'pen BIC class has established itself as an exciting and interesting class for young sailors all over the world, and this year is no exception. Inspired by the presence of our event patron, sailing legend Sir Russell Coutts, and challenged by a week of changing conditions that evolved from ultra-light to very strong, the 133 young sailors present here in Manly Bay, Auckland, New Zealand for the 2019 World Championships have risen to the occasion and delivered us a week of excellent, tight racing all done with the sense of fun and fair play that are synonymous with the O'pen BIC concept, and we can now reveal the names of our brand new champions.

In the end, both age divisions were led from start to finish by their respective champions, which sounds a lot less exciting than the reality. After five days and twelve rounds of racing, the eventual margins of victory and podium places were as narrow as it's possible to be, and the new champions have thoroughly merited their moment of glory. 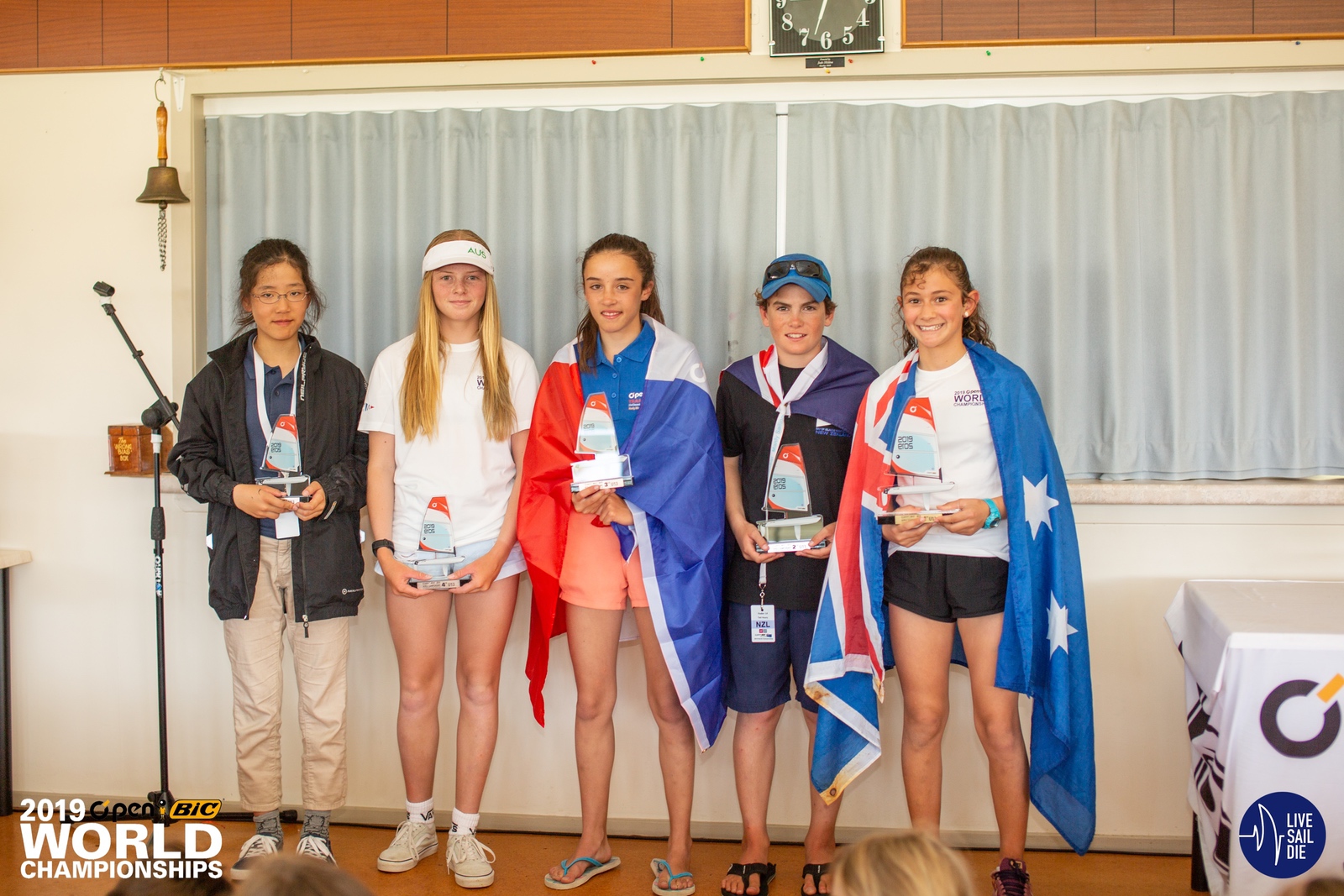 In the U13 division, Australia's Breanne Wadley confirmed her status as pre-championship favourite by leading from start gun to finish gate and claim the crown. But it was by the finest of margins as home-boy New Zealander Ted Houry finished strongly on the final day, missing out on top spot by a single point. These two were some way ahead of the battle for third place, which rightly went to the consistent Tiphaine Rideau from France, who pipped the fast-finishing Australian Drina Bucktin and the plucky but unlucky Saki Nukui from Japan to the bronze medal. 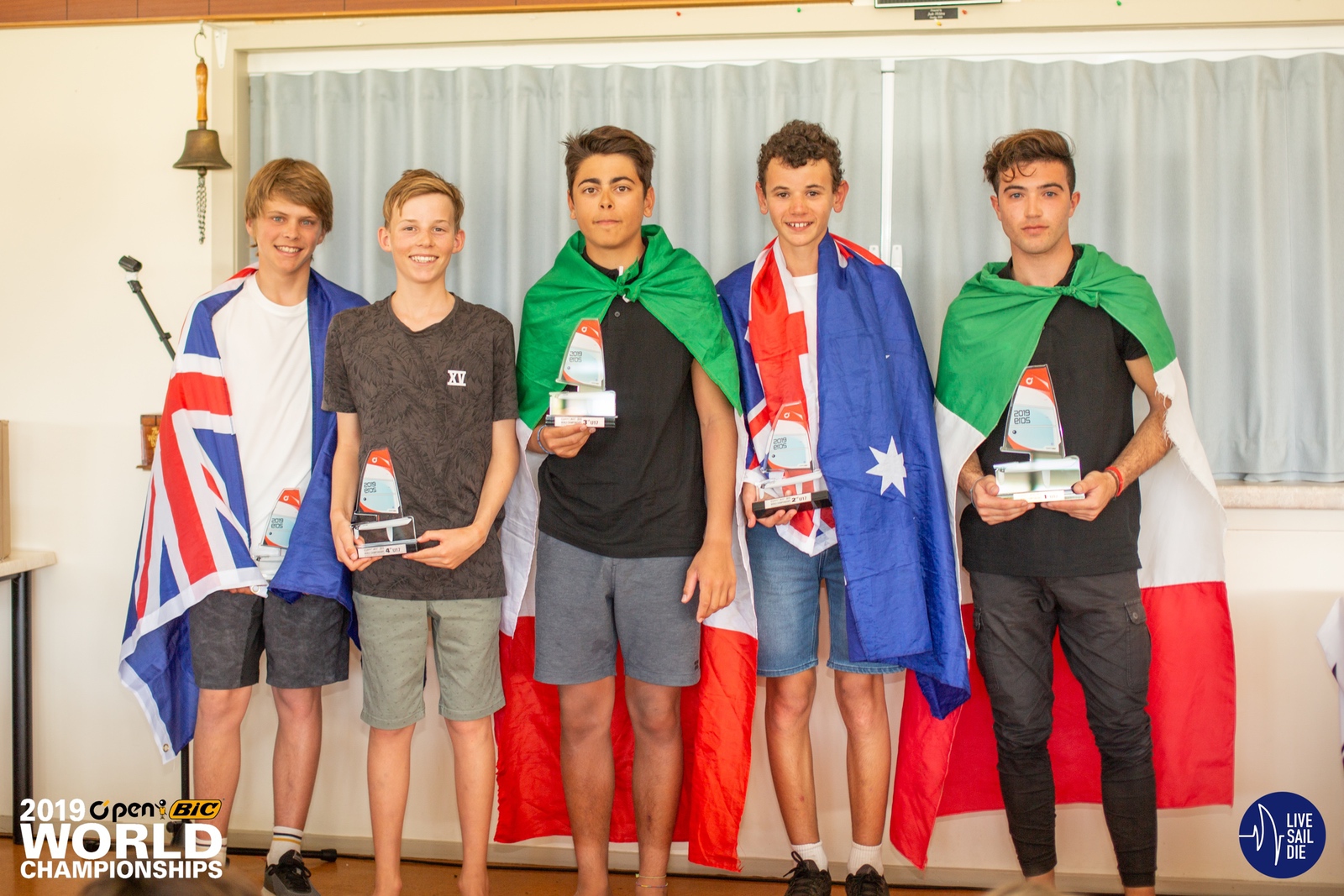 Meanwhile, in the U17 division, things weren't quite as tight but were nonetheless equally fascinating, as another start-to-finish leader hung on under intense pressure for a deserved victory, and reward for making the long journey to this legendary southern hemisphere sailing spot. Italy's Davide Mulas took advantage of an early week lapse by pre-championship favourite, Australia's Travis Wadley, to establish a lead that he successfully defended under unrelenting pressure throughout the week to hold on for victory, fully justifying the effort and air-fare required to compete and win on the other side of the world. And third place eventually went to Mulas's Italian team-mate Leopoldo Sirolli after a victory in the week's final race, easing out local lad, New Zealander Josh Hyde who had been in contention for all the previous eleven rounds.
Congratulations to our new Champions, who will get to hold on to their titles for quite some time before the 2020 Worlds take place. But congratulations to all the young sailors, who have once again shown what it is that makes O'pen BIC such a successful format, enjoyed by youngsters all over the world.
And a massive thank you to our hosts here at the Manly Sailing Club for the warmth of the welcome and the excellent organisation that have made this such a successful week.

This site uses cookies to enhance the performance. Accept